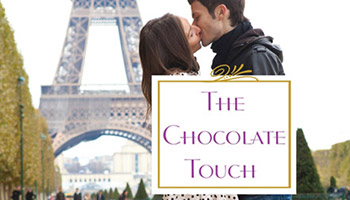 The Chocolate Touch ebook is on sale for $2.99 this week! Dom and Jaime's story! (I'm very excited about this, because the regular price is $11.99, and I love this couple so much. I'm so glad that the price drop might make them more accessible...

Elena of Ellie Reads Fiction sent me this news on The Chocolate Touch's launch in Bulgaria. I love it! (It's in Bulgarian. Google Translator had to help me there.) Radi Stambolov,  one of the most famous chocolatiers in Bulgaria, and pastry chef Borislav Ekzarhov were special guests, and they...

Happy May Day! It's one of my favorite days of the year in Paris, the streets filled with that sweet, lemony scent of lilies-of-the-valley or muguets. (Interestingly, in my perfume studies, I have learned that it has been impossible so far to in any way...

Ooh, want to do a book club brainstorming? We haven't done one in a while. The Amazing Book Club Queen Shannon is doing THE CHOCOLATE TOUCH with her Mom Mafia group next month, and another club also emailed about the same book that they're doing...

THANK YOU all again so much for continuing to fight for these books in this DABWAHA contest! Crazy fun, lots of silliness. THE CHOCOLATE TOUCH went down in defeat before Julie James. (But, to be honest, I was just flattered to even be in competition...

First of all, THANK YOU all for voting both THE CHOCOLATE TOUCH and SNOW-KISSED on in this DABWAHA. I really appreciate all the support. I hope it is not a pain for people to keep being nagged for votes! SATURDAY Noon to Midnight (CST), THE CHOCOLATE...

By now, many of you are aware of the intense campaign season going on, in the online March Madness DABWAHA book contest. You know by now, of course, that many voters choose THE CHOCOLATE TOUCH and SNOW-KISSED to beat out Nalini Singh in the final round....

Sales, first: THE CHOCOLATE THIEF ebook is on sale for $2.99 on Barnes & Noble. A DABWAHA nominee last year, and the first of the Amour et Chocolat series. And this year's DABWAHA nominee, also a Dear Author Best Book of the 2013, and the AAR Reader...

A lovely reading from THE CHOCOLATE TOUCH by the wonderful Ruthie Knox. Ruthie's beautiful words to go with the reading: "Laura’s books create a Paris of the imagination, a Paris of chocolate and technique, mastery and admiration, and most of all, a Paris of intense and...