From international bestselling author Laura Florand, a story of trust and longing, in her series Paris Nights. 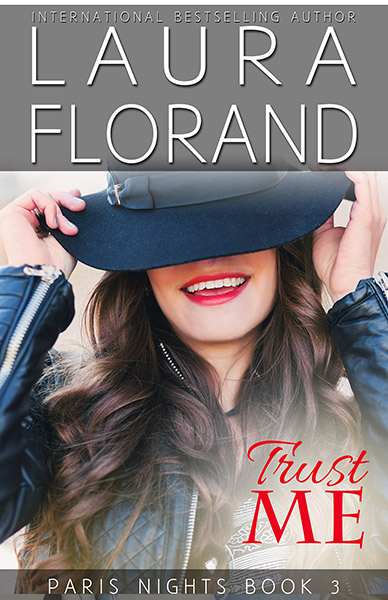 Top Parisian pastry chef Lina Farah is used to fighting for her success. But when a violent attack shatters her security, she needs a new tactic to battle her dragons. What better way to banish the monsters under her bed than by inviting a sexy SEAL to tangle the sheets?

Elite operative Jake Adams has never stayed in one place long enough to form a lasting relationship. Lina’s fire and beauty tempt him to give her the hot affair she craves. But her spirit and courage make him long for more. Can he convince a woman seeking forgetfulness to dream of ever after…with him?

Lina was fighting a dragon.

You’d think a dragon would know better than to mess with an international heroine who could take terrorists out with a bucket of liquid nitrogen, but no.

The damn thing was smirking at her.

She revved her chainsaw. You sure you want to take that tone with me, lizard? Ice shards flew as she took her saw to the curve of its neck, the cold in the room trying to overwhelm her body heat even through her gloves and hoodie.

Why the hell she had wanted to learn to ice sculpt, she did not know. It had seemed like a fun new challenge when she first took her motorbike out to Brittany to talk a famous sculptor there into teaching her his tricks—after all, she got to wield a chainsaw—but then hell had exploded in the Au-dessus kitchens, and now she was still on the hook for next month’s contest and likely to humiliate herself by coming in last place, at the rate she was going.

Of course she’d probably be excused for giving up, in the circumstances. Backing down.

And a big figure moved in the doorway of the freezer.

She swung violently, the chainsaw slicing straight through the dragon’s neck. Ice shattered on the floor around her boots.

Size, danger, violence, freckles, and all her adrenaline shooting into her bloodstream ready to fight him—

It was him. The mountain lion.

Jake. Friend of Chase “Smith”, Vi’s ridiculously over-confident new boyfriend. (Vi had the worst taste in men, honestly.) Favored leaning in the doorway of Chase’s hospital room, watching Lina as she left the elevator with her police security and went into Vi’s hospital room. Watching her when she came down the hallway to check on Chase.

Long, lean, powerful. Hazel eyes, red-gold hair clipped short. Hard jaw. Controlled movements. And as far as she could tell, covered all over in freckles. This thick, golden-brown layering of them, as if every mote of sun that had ever had the chance to touch his skin had clung to him, unwilling to let go.

Greedy sun, just wanting to get its hot little rays all over that life of him. Would he have the same freckles on those broad shoulders? That hard, flat belly? That tight butt? His…did freckles go to…that is, she’d never seen a freckled man without any clothes before, was it possible that he’d have freckles on his…that the sun would have gotten all hot and greedy with his…

Are you turning into a nymphomaniac in some kind of post-traumatic stress reaction?

Probably worse things she could become. Scared. Weak. Paranoid. Yeah, all the other options made nympho sound pretty enticing.

She cut off the saw and set it on the steel table by the destroyed dragon, then bent to pick up the biggest two chunks of the decapitated head in her gloved hands. Totally ruined. After all that work. Her fingers cramped around them suddenly, in a spasmodic urge to throw them across the room, to scream, to grab the block left and just batter it to the floor.

She took a deep breath and let it out, setting the chunks down, pulling off her thick gloves, pushing back the hoodie of her sweatshirt, pulling out her earplugs. “Little life tip. Never sneak up on a woman fighting a dragon with a chainsaw.”

From the subtle amusement in Jake’s face, he probably took out six crazed chainsaw-wielders with a toothpick before breakfast every morning. “You know, it does seem as if my training should have included more practical tips like that. I’ll have to tell my old instructors they missed a situation.”

“They probably counted on you to have common sense.”

He cocked his head and considered that a moment. “A group of wild teenage males who thought they could become the biggest bad-asses on the planet? I doubt it.”

True. In her eleven years in top-notch kitchens, she’d dealt with more than her fair share of teenage males wielding lethal objects. Common sense didn’t come into it.

“The real question is how do you approach a woman with a chainsaw?” Jake asked. “Any tips?”