When my daughter was even littler than she is now, she absolutely wanted a snow globe of the Eiffel Tower from one of those infinite number of tourist traps selling them in Paris. So although it went against our ironic Parisian grain, we got her one.

When she got off the Métro, she was heartbroken to realize she had left it behind on the train.

Her father found her another one. It was dropped or perhaps sat on and broke and she cried.

Her grandmother after work the last day before we left Paris that trip searched around until she found one for her and brought it home. My daughter stowed it in her backpack, delighted.

Security confiscated it. (It was a tiny snow globe, far less than an ounce of liquid, but that’s the way airport security is sometimes.)

Her grandmother found another one and wrapped it up in bubble wrap and sent it to her in a Christmas package.

She kept it very proudly and very carefully on a shelf until one day she really wanted to take it to school for some class project they were doing on where students come from.

Later she recounted this mysterious episode in class when water just landed in the room, and no one could figure out where it came from, but it wasn’t until a few days later when the teacher reported finding a tiny collection of glass fragments in the side pocket of her backpack that we made the connection to, yes, once again a broken Paris snow globe.

Now she has one in plastic.

Perhaps my daughter’s stubborn search for a beautiful Paris, protected in a bubble, that she can carry with her unbroken is why this image from Soulcié resonates with me particularly. A friend in France shared it on her Facebook. 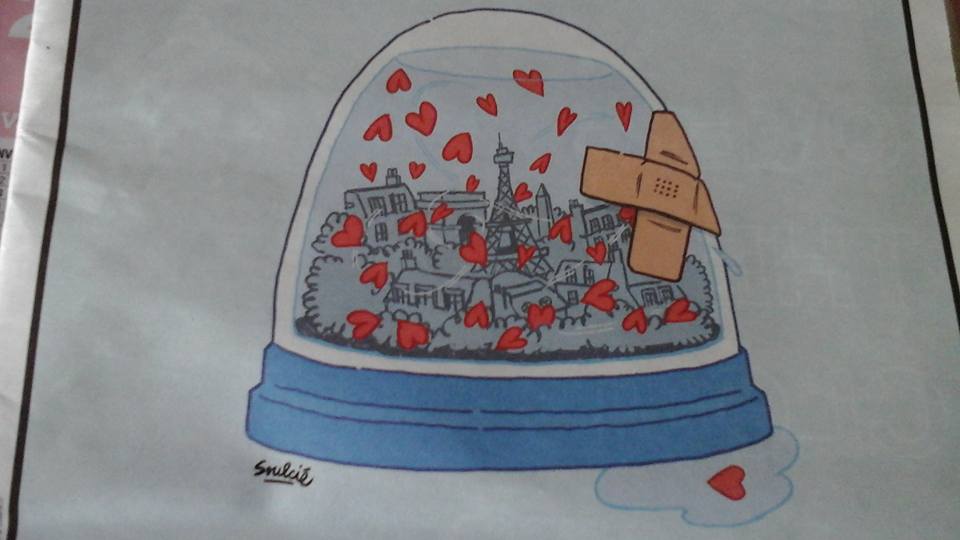