Happy World Kiss Day! A snippet from All For You

Happy World Kiss Day! A snippet from All For You

in All for You
0 Comments

Happy World Kiss Day! Hope you are doing your duty.  Now all of you who were carefully restraining yourselves during UK’s Kiss Day can have at it!

A little snippet from ALL FOR YOU. Because there are all kinds of kisses.

“No,” she agreed firmly, making a fist of encouragement, cheering him on. “You won’t. I know you won’t.” You’re such a good guy. My only good guy. And behave, you stupid wiggles. “You can do anything.”

“Right,” he agreed, that monosyllabic intensity of Joss’s that turned one short word into a vow. He shifted his hand to her chin, still holding her eyes.

She held very still. She kept her lips faintly parted. Just in case that was all the encouragement he needed to bend his head and …

Kiss her on the cheek.

Her heart sank in disappointment.

But he didn’t let go of her chin, after the good-bye bises were finished. “Célie. I’ve got to go.” That deep voice of his made her want to curl up with it so badly. Most nights, she pretended Joss and his deep voice were in her bedroom with her, just to comfort her enough so that she could fall asleep.

Something about the intensity in his eyes made her want to step forward and curl up in him now—press herself against his chest, get him to fold his arms around her, as if he was going to be wrenched from her if she didn’t. But other than the time when she’d started crying after her brother was arrested, he never did hold her. She was the kid sister.

“I know,” she said wistfully. Of course he had to go. He probably had a date or something. She was such an idiot.

His other hand shifted in his pocket. As if he was clenching it and unclenching it.

Up went her chin. “Of course I will!” This place could not get to her.

He bent again. And—

A third kiss on her cheek. A fourth.

The full four bises, as if they came from some extra-affectionate part of France, the kind of regions where arriving at a party and greeting all the guests exhausted your cheeks. Not so common here, unless for a greeting after a long absence or a long good-bye. Or maybe, to give each other courage.

Or maybe because … he was noticing her? Maybe liking her? Not quite ready to move straight to a kiss on the mouth, but getting interested? Wanting an excuse to touch her more?

She tried to hold very still, so as not to shake any possibility of a birth of interest away.

What was wrong with the way she looked at him? Heat climbed into her cheeks. Damn it, if he knew about those wiggles …

He opened his eyes, holding hers with that beautiful, beautiful hazel green. “Célie. You know I’m just a man, right?”

“No!” she said indignantly. She did not know that at all.

“Made of clay,” Joss said, his mouth turning down. “I’m not good enough for the way you look at me.”

Okay, now he was talking crazy. She put both hands on his chest. “You’re Joss. You can do anything!” She shouldn’t have to keep repeating that last part. It was so inherently true to who he was that she wanted to kick the world, kick her own brother, for vandalizing Joss’s belief in himself. People around here got their graffiti on everything else, but they could damn well keep their grimy, destructive hands off Joss Castel.

He stared down at her a long moment. Then strength seemed to infuse him, even more strength than he always held, as if he grew three centimeters in every direction just from her belief in him.

Well, good. She willed more of it into him, trying to pour it through her eyes into his heart. You are the biggest, best, most wonderful guy in the world. Don’t let this get you down. You can do anything!

“Right,” Joss said. He took a deep breath that seemed to expand his chest to superhero size. He squeezed her chin one last time. “I can be good enough,” he said like a vow. “Way the hell better than this.”

Exactly. You can do it! Don’t let this place get you down! She pushed the thoughts into him until her forehead hurt from the effort.

His hand left her chin—but then it was as if he couldn’t stop touching her, because he stroked a wisp of hair back off her face, tucking it behind her ear. His fingers lingered over the curve of her ear and then, far too soon, fell away.

Célie flushed all through her, this rosy, starstruck hope.

“Bonne nuit, Célie.” He started to turn away, then stopped, and looked back, gazing down at her as if he had to memorize her for a test. “You really are the best part of my day.”

So Célie was radiant when she curled up in her bed that night. She glowed so much she could have been her own night-light. Tomorrow—tomorrow she was going to wear her sexiest shirt, the one with the deep V-neck, and the jeans that really hugged her butt, and, and … she lost herself in dreams of what he would do, of how she might just trip a little when he kissed her cheeks, see if she might get their lips to meet for real tomorrow, because maybe he would like it. She dreamed it until those dreams blurred into sleep.

So it was a complete shock to her when his mother showed up at the bakery the next day in a hysterical rage, blaming Célie because the evening before, her son had caught a train south and joined the Foreign Legion. 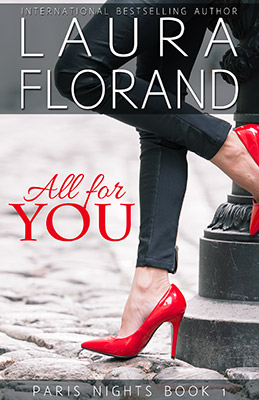