Winner of yesterday’s chocolate cup is Megan B! More chances to win today, just comment on this post or hop over to Facebook for more chances. And of course everyone is entered into the grand prize drawing of John and Kira’s chocolate at the end of the week (which ends Monday for the purposes of this giveaway.)

Today I’m featuring author Stephanie Doyle’s sexy and emotional ONE NAUGHTY LITTLE CHRISTMAS. John and Kate have never met…but they both need a second chance. And they find it one Christmas Eve… 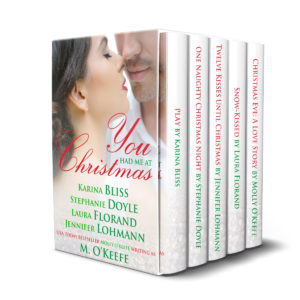 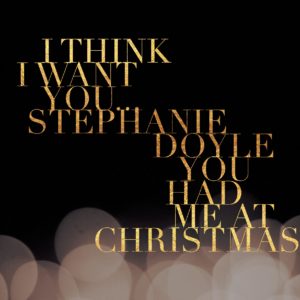 Excerpt from One Naughty Little Christmas, by Stephanie Doyle, copyright 2016.

Kate stared at the glass of wine in front of her. Deep red, a robust flavor. She’d paid too much money for it, but hey, it was Christmas.

She looked at her phone and wondered if she was really going to do this. Then she glanced over at the clock on the wall. Eight-oh-three. Hours until she could go to bed. Hours until it would be tomorrow. The harmless, meaningless twenty-sixth of December.

She took another sip of wine and reached for the phone.
The other day, her assistant had downloaded a dating app specifically for people over forty. A more serious, more mature group of single people looking to find each other.

“You’re hot, you own a company and you’re a total catch,” Sally had said. “You just need to get out there, and this is how you do it in 2016. Welcome to the new world of romance.”

It was the perfect distraction from her thoughts—and a way to kill the night without having to watch It’s a Wonderful Life for the thousandth time.

Tentatively, like it might bite her, Kate tapped the screen.
“Green for yes, you like his picture, red for you’re not worthy of me and I never want to see you again,” Sally had laughed as she showed Kate how to play.

So ridiculous, Kate thought. As if you could just look at a picture and know that you were interested in him without knowing anything about him. Of course, she imagined it wasn’t much different than going to a bar and making eye contact.

Attraction. It was the first step in the dance, really.

Keeping an open mind, Kate opened the app and waited a second before a picture popped up on her phone.

It was as simple as that. She was to look at the picture and make an instant judgment. Was she attracted to him or wasn’t she?

Kate tapped the red button and tried not to feel guilty for rejecting someone for a completely superficial reason. The truth was, she thought he didn’t look very well-kept in his picture. She thought someone trying to make a first impression should have tried a little harder. The next man had a nice face, and she instantly went to green. The app told her that he had also seen her picture and liked it.

Awesome. Someone in the world found her attractive. See, Kate told herself, forty was the new thirty.

Now she had a choice. Keep playing or send him a message. Not really having any idea what to say, she chose to keep playing.
Five pictures later, two no’s and three yeses, and suddenly there was a blinking orb on her screen which, when she tapped, told her that someone had sent her a message.

“Geesh. That was fast,” Kate said to the empty room as she took another sip of wine. It was clearly best to play this game a little tipsy. She read the message.

“Not exactly poetry,” Kate chuckled, and instantly swiped on the picture in order to delete it from her view.

While deleting someone over one sentence seemed harsh, Kate was very sure that if a man walked up to her in a bar and said such a ridiculous thing, she would have turned her back to him. The equivalent of delete.

Kate played on, acknowledging that the satisfaction she got when she got a hit was way better than wallowing in self-pity on Christmas night.

Then his picture came up. She had no idea why it struck her, but it seemed to go right through to her very core. Nothing like the pictures of men with their cars, or their dogs, or their kids. Or her least favorite: standing in the bathroom with the toilet seat in the background, trying to take a picture in front of what must be the only mirror in the house.

Kate couldn’t help herself. She imagined a million stories that made up the lines in this man’s face. Around his eyes, his mouth. His actual age wasn’t listed. It didn’t matter. He could have been older than her, or younger than her, but either way she realized he’d lived more in the years he’d been on this planet. That’s what his face said. She had this crazy idea maybe he could show her how to do that.

How to really live.

Kate hit the green button and held her breath. 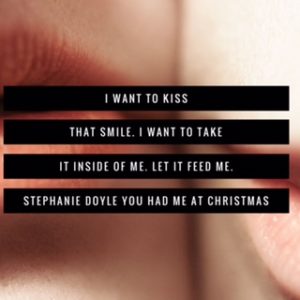