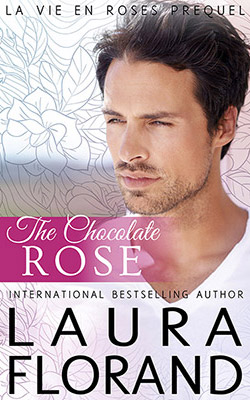 Top chef Gabriel Delange never forgave his old nemesis Pierre Manon for all the other chef had cost him.

And he most certainly couldn’t stand the sight of his own most famous dessert, the legendary Rose, claimed as Pierre’s own on the cover of his new cookbook.

But even Gabriel could hardly go through with a lawsuit when he learned the older chef had just had a stroke.  Especially not when Pierre had one very cute daughter willing to be Gabriel’s victim instead.

As a child, Jo had seen her family torn apart by her top chef father’s obsession with his work.  Now a food writer, she might be fascinated by a chef’s work, but she knew how to guard her heart.  She would never allow another chef into her life.

Unless he blackmailed her into it…

Welcome to the heat and sun of Provence, where jasmine and roses climb up old colored walls, where fountains play in ancient stone villages, and where even a beast can prove he is a prince at heart…

The notice of the lawsuit arrived two weeks after the cookbook came out.  Jolie opened it, spotted the words “on behalf of our client, Gabriel Delange”, and felt the bottom drop out of her stomach.

Oh, God.  Jolie spread the letter by the cookbook, centered proudly on her desk.  Her father’s name, PIERRE MANON, stamped its big, glossy, silver cover, right above the most beautiful thing to ever come out of her his kitchens:  the Rose.  Back when she was a teenager, every TV crew that filmed her father filmed that rose, every magazine article about him showed it on its cover: out of all the beautiful dishes from his kitchens, the most sublime.  Pink and red gently streaked great white chocolate petals, the outer ones spreading into bloom, the inner ones still curved, reluctant to break free from the bud, protecting for one last second the heart inside.  That heart glowed under those petals, a sliver glimpse of pure gold.  It was heartbreaking to eat it, and yet if you didn’t, it would die within minutes, the gold leaf collapsing as the Tahitian vanilla mousse it encased melted in the passionate heat of the raspberry coulis beneath it.

Only her words and the food photographers’ images could catch such a thing and give it permanence, like catching a firefly’s glow.

She remembered now her father’s hesitation when she had insisted on the Rose for the cover, how he had looked away and proposed other things and then at last smiled into her eager eyes and yielded.

Brought on behalf of his former chef pâtissier, Gabriel Delange.  A man she primarily remembered from over a decade ago as being tall and far too skinny, yet somehow managing to fill a room with his energy, until he was all a teenager stuck in her father’s office could look at.  She had had a tiny bit of a fourteen-year-old crush on him.  Gabriel Delange, who now stated that the work featured on the cover of the book as well as twelve other recipes in its contents were his.  And that since he had previously warned Pierre Manon against appropriation of his work, he preferred to settle this in court.

So romantic and sexy.

Each time I open one of Ms. Florand’s books I am captivated by her imagery, the life she brings to these huge personalities and her creative way of telling a story that revolves around food.

If you haven’t yet discovered Laura Florand and her Amour et Chocolat series, you need to remedy that, immediately. The Chocolate Rose, like the famous dessert itself, is sweet and sumptuous, with a hidden center that will surprise you. Vivid descriptions, fantastic characters and plenty of sensual innuendo can be found within its covers. Find yourself some good chocolate, a comfortable chair and lose yourself in Gabriel and Jolie’s story.

Gabriel has become another favorite hero of mine from Laura Florand’s Amour et Chocolat universe... I love his character, his energy, his dedication, ...how he is just so out there...

You can taste the food, feel textures, smell flowers. (Florand's) writing is very evocative and makes me want to travel the world or eat a giant box of chocolate.

A shorter but just as sweet tale that will not disappoint Florand's numerous fans.

With its gorgeous settings I have truly fallen head over heels by this series by Florand...I don’t think anyone can top my love for Gabriel so far, but with Florand’s books I guess I shall just have to wait and see...