BLAME IT ON PARIS 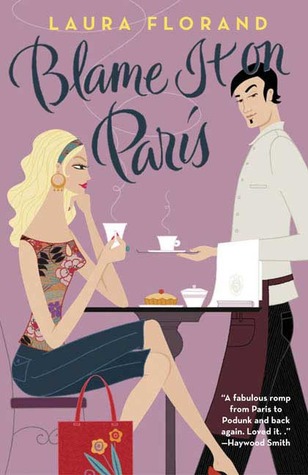 Publishers’ Weekly describes Blame It on Paris as “a frothy French confection”, and Booklist calls it “hilarious… a fun, frothy tale for anyone who has ever conjured up a dashing handsome foreigner to sweep her off her feet.”  Read an excerpt or scroll below for more of what others are saying about Blame It on Paris.

Note that this is a memoir!  As such it is very different from the Chocolate series as a narrative.  If you’re looking for a romance, go check out my other books.  But if you are interested in a humorous, often anecdotal, look at what happens when 2 cultures meet and marry, keep reading!

Le Relais du Vin was nestled in the heart of Paris, Les Halles.  The original heart of Paris, that giant, unhygienic, life-filled market that used to be Les Halles, was destroyed in 1963, the single most appalling city-planning decision Prime Minister Pompidou would make in his tenure of architectural horrors.  Since 1135, Les Halles had been the biggest market in Paris and perhaps even in Europe, the market that supplied all other markets, filled with energy at all hours of the day and night.  1135.  828 years.  The government replaced it with a glass and aluminum mall, the Forum des Halles, so now you can stroll among a bland collection of chain stores full of cheap clothes in the spot Zola called the stomach of Paris and Napoléon III the people’s Louvre.

Les Halles is the nexus of most of Paris’ Métro and RER lines, and people cram up and down escalators onto other lines or into the three underground levels of the Forum des Halles.  The racial and social tension vibrates against your skin as you walk through the area until the fine hair on your arms stands straight up from the charge.  This tension streams in along the RER lines from the suburbs, where Paris exiles its housing projects, and compacts into dense, hard energy at Les Halles.  It hovers on the steps outside the Forum, where most of the drug trades seem to take place, judging by the odors and the police busts, or prowls the surrounding cobblestones.

“Fuck your race!” one man screamed at another as my friend’s little sister and I crossed the street in front of the Forum.  “Fuck your whole race!”

I smiled weakly at the little sister I was supposed to be keeping safe.  She didn’t speak French, but when two men start screaming at each other in the middle of a dark street, it’s so rarely a good sign.

Across from Le Relais du Vin, the neon words SEX SHOP blazed red.  Up and down the street, rivals in the sex sales business competed using their own sledgehammer-subtle titillation, neon glistening on rain-wet cobblestones.  “Ssss, ssss, miss, miss,” men called, coming out from their crêpe stands or their straps-and-leather clothes shops or, not tied down by any job, simply strolling along behind us.

We were actually doing better this evening than the last time I had walked across Les Halles, in broad daylight.  Two men had fallen into step behind me as I headed from the Métro down to Rue de Rivoli, which has at least 100 shoe shops but somehow never a shoe without four-inch heels.  “Oh, girl, you’ve got to stop walking like that.  My dick’s gonna bust if you keep walking like that.  It’s rising, it’s coming up, it’s gonna bust.  I told you to stop. . . . ”

In the midst of this sordid world, Le Relais du Vin took up the space of a handkerchief.  From the street, we could barely make out the faded gold name swirling above the door and could see only a crowded bar through the glass front window.  I hesitated, but the hissing men moved closer at that first sign of weakness, so we plunged in.  An American restaurateur couldn’t have fit five people comfortably in this spot, but the man with the balding pate and the wild gray hair behind the bar had managed to orchestrate seating for a cheerful 20.  We slipped past a Prévert poem painted above the dumbwaiter as we fit our way between the bar and two round bar tables.  The mural on the Relais’ wall appeared not to have been touched in 20 years.  The trompe l’oeil painting gave the impression that we were looking out from our own homey apartment over the rooftops of the old Halles, in the days when it was an ancient, famous marketplace.

The waiter greated us with that French courtesy, not smiling, but not not smiling either:  calm, reserved, and competent.  I couldn’t help noticing he was drop-dead gorgeous as he pulled a table out far enough that my hiney barely even grazed the edges of our neighbors’ plates when I squeezed into a corner.  (They smiled, flicked a piece of lettuce off my tush, and said that was quite all right.)  Very nicely formed biceps eased the table back to lock me in and let my friend’s sister, Tory, sit down.  I saw black hair, a 5 o’clock shadow, and a long, lean, well-muscled body all in a flash.  Wow, I just had time to think, and then the menus were on our table, and he was gone to bring somebody a bottle of wine.

Tory, a cute and slender brunette, fit right in with this crowd, except for the daypack she had insisted on bringing with her and the worried look on her face.  The worried look was either due to the cramped seating and aged decor or to the fact that her seat left her back to the waiter.  Then again, it might have been the SEX SHOP sign we could still see flashing through the window.  “I hope this is okay,” I said.  “Valérie has great taste in restaurants usually.  Anyway, even if the food is bad, that waiter is really cute.”

“Over,” I said, looking at him again.  “This guy is seriously gorgeous.  Look at him.  Look at the way he moves.”  He was negotiating the tight quarters and multiple demands with a sexy economy of motion, and never once did he even brush against a table, let alone knock something over.

“He’s French, though,” Tory pointed out.

“Well, I’m only looking.  I’m not stupid.  Of course I wouldn’t actually try to date him.”

“Because the French cheat,” Tory said.  “Everybody knows it.”

“And they’re male chauvinists,” I agreed firmly.  “Everybody knows that, too.  Plus, he’s probably gay.  Plus, who would want to get involved with someone who lives in this stupid city?  Look at the way he opened that bottle of wine.  Isn’t that beautiful?”  He moved with such no-nonsense smoothness, as if it was the most natural thing in the world to be that sophisticated, that graceful.  A Polynesian style armband of a tattoo peeked out from under the short sleeve of his pressed black shirt as he pulled the cork from the wine, hard muscle flexing just a bit to hold the bottle steady as he did so.

“He is probably gay,” Tory agreed with pseudo-regret.  She was only spending three days here, so what did she care?  “If he’s that cute and he’s got a sense of style.”

“Well, he’s Parisian.  He could be well-dressed and straight.  The thing is–”

The object of our conversation stopped by our table.  My tongue froze, and a flush climbed up my cheeks.  He looked down at us with courteous attention.  “Vous avez choisi? »  Have you decided?

“I – I’ve got a question about the menu.”  Never say I can’t think fast when I need to.

I put my finger on a menu item at random and lowered my voice.  He leaned closer automatically to hear me.  “The boudin, what is that?”

He smiled.  It was just a little smile, but it warmed those dark brown eyes like a fondue flame warms chocolate.  “It’s delicious,” he said enthusiastically.  “You’ll love it, I promise.  It’s intestine filled with blood, pork fat, and onions.”

“It’s really good,” he promised, smiling at me with those warm chocolate eyes.

Thank God.  “And the bavette for my main course.”

Okay, it was maybe pushing it to pretend not to know the words for “rare” and “medium rare”, but he had a faint scent of vanilla that was just luscious with him standing so close to me.  “Saignant is…?”

“The meat’s red all the way through.  It’s the best way to eat meat.”

A faint hesitation must have shown in my eyes.

“But if you prefer,” he said consolingly, “à point is cooked just a little past that and is quite good, too.”  For sissies, I caught the subconcious thought.  He didn’t seem to mind that I might be a sissy, though, or even hold it against me that I had an American accent.

“Saignant,” I threw caution to the winds.

“Very good.  And I’ll save you the last chocolate mousse for dessert,” he whispered.  “If you’re sure that’s what you want.”

A fun, frothy tale for anyone who has ever conjured up a dashing handsome foreigner to sweep her off her feet. Readers will be happy to live vicariously in Laura's French fairytale

Laura Florand offers up an outsider’s oddly inside view of Paris, and she does so in a narrative that is by turns witty and touching, but always charming. Best of all, she turns the tables and lets us see our own culture through the fresh, French eyes of the man she loves. Do yourself a favor: Read this book.

A fabulous romp from Paris to Podunk and back again. Loved it. Laura Florand’s reluctant heroine is adorable, and her perfect Parisian amour can wait on my table anytime.

A romantic, hilarious soufflé of a story! Move over, Bridget Jones. Charming and laugh-out-loud funny.

This delightful book should come with a warning label: do not read while traveling, otherwise other passengers will wonder why you keep laughing aloud and shouting ‘Vive la Laura Florand!

I was taught in high school chemistry never to combine two ingredients whose properties you don’t fully understand. Well, Laura Florand ignored that advice and mixed a Parisian gentleman with a Southern lady, and what she got, predictably, was combustible. Blame It on Paris is a charming, light-hearted romp through a cross-cultural quagmire that proves that love, if it can’t conquer all, certainly is a match for a couple with families at different ends of the universe.

As enchanting as Paris in the spring, Florand’s debut sparkles with all the brilliance of the City of Light. Warm, funny, and sublimely satisfying, BLAME IT ON PARIS follows Laura as she journeys around the world in search of herself - only to discover home is in the hearts of those she loves. I’m adding Laura Florand to my must-read list!

— Alesia Holliday, author of Seven Ways to Lose Your Lover.